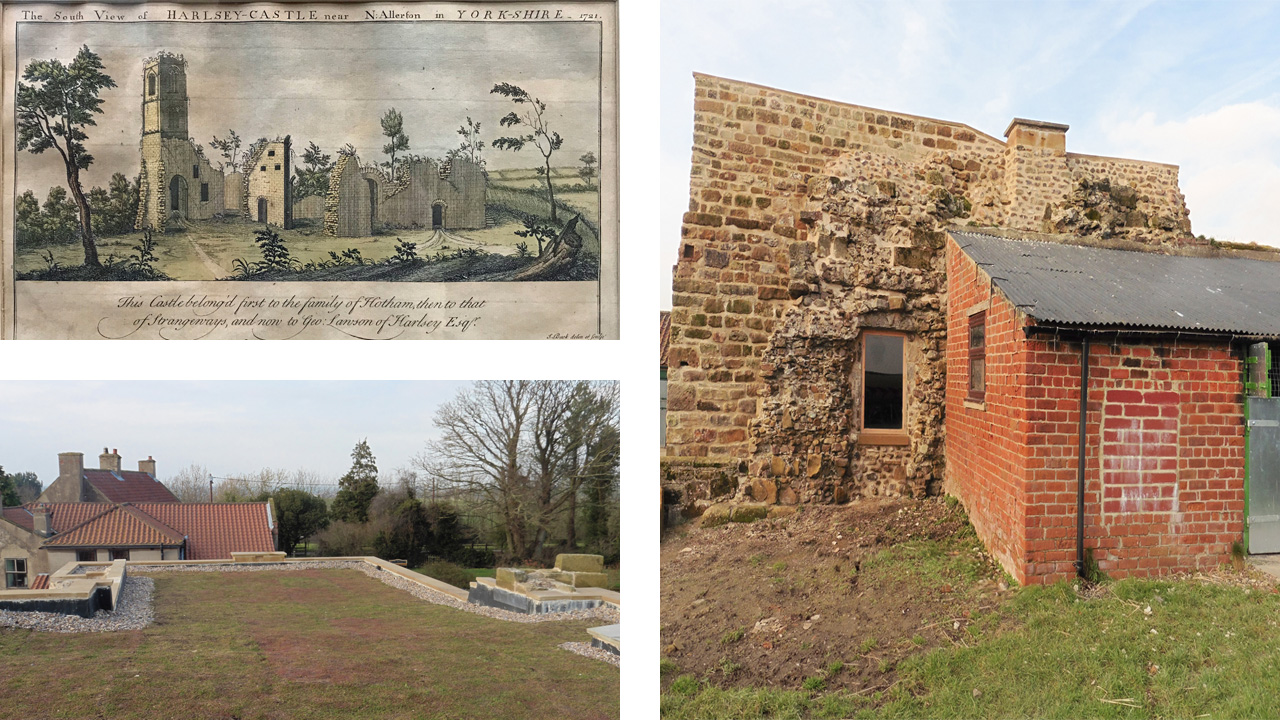 At the north end of the Vale of Mowbray, on a wide, steep-sided spur stand the ruins of Harlsey Castle. The single storey, three-bay, stone-built structure in the farmyard is actually part of what was once the lower storey of an impressive early C15 castle keep. It has two wagon openings to the centre and left, with a smaller doorway to the right. Inside, there are three chambers with stone barrel-vaulted roofs. Harlsey Castle is surrounded by a moat; this is still visible to the north, east and west of the castle. West Harlsey is mentioned in Domesday Book. This now deserted settlement was located east of the moated area.

Harsley Castle was built by Sir James Strangways, a judge of Common Pleas who purchased the manor in 1423. His son James was High Sherriff of Yorkshire and Speaker of the House of Commons. The family’s fortunes continued to prosper when later generations profited from the dissolution of the monasteries at Mount Grace and Rievaulx. Harlsey Castle probably fell into disuse after the manor was forfeited to the Crown in the C16. The land is now farmed by the Kirk family.

Today the remains of the castle are much reduced. Upper storeys have been lost. Many of the large, smooth blocks of ashlar stone that formed the outer walls of the castle have disappeared over time, leaving the rubble core of the walls exposed. This was never intended to resist the driving wind and rain that regularly batter this exposed site. Despite previous attempts to make the structure watertight by 1999 it was letting in water so badly that it was added to Historic England’s Heritage at Risk Register.

Over the past five years the structure has been the subject of much detailed survey and recording.  This has revealed fascinating long-hidden architectural details such as clay floor tiles and arched openings. A grant from Historic England has helped the owners to repair the building and make it wind and watertight.  This has included archaeological recording, point cloud laser scan modelling, construction a BIM model and repairs installing a new ‘green’ roof, consolidating the existing masonry and rebuilding some areas of lost masonry. Where new materials have been introduced, these are intended to be easily identifiable so that they can be distinguished from the medieval fabric.